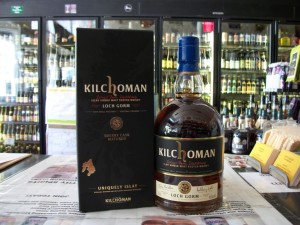 Just got in the new sherry cask matured version of Kilchoman Islay whisky. I’ve had my eye on the Kilchoman distillery, established in 2005, since they became the first new distillery built on the island of islay in over 100 years. They are currently one of the few farm distilleries, which means they grow their own barley and malt it on site. They do source a percentage of their malted barley from Port Ellen, just like all the other distilleries on Islay, but its a fun concept none the less. Since they’re such a young distillery I’ve been waiting for some older stocks to come along. That’s going to take some time, but fortunately they had the foresight to use some first fill Oloroso sherry casks for their new release “Loch Gorm”. The first fill casks really give a lot of depth and oak, making it taste much older than a 6 year whisky. Combine that with a super intense smokiness and for me it’s reminiscent of a cross between Laphroaig and Lagavulin. Not quite as refined as either of those two but an incredible flavor profile, and a great new addition to a region Scotch fans can’t get enough of.

Available at both shops!