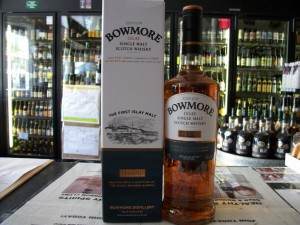 So finding inexpensive single malt Scotch is getting harder and harder every year. The world wide demand is at an all time high. Some value brands, like Singleton 12 year, have been pulled from the U.S. market entirely just to accommodate the growing Asian and European market’s demand. Islay whiskies are without a doubt at the forefront of this trend with peat-heads world wide having a seemingly unquenchable thirst for all things smokey. Distilleries like Laphroaig have had to take drastic measures. Since there’s no way for them to go back in time and create more whisky, they’ve had to double their prices just to slow down sales. Their flagship 10 year offering that was once $30 a bottle six months ago you’ll find for $50-$60 today.

Enter Bowmore “Legend” one of the last great Islay single malts you can still find at a reasonable price. While Bowmore isn’t quite as smokey as Laphroaig it more than makes up for it by having an intense briny saltiness, a beautiful minerality, and a soft-remarkably well balanced peaty smokiness. Logic tells me they won’t be able to keep this price going for long, as every other Islay producer has long since abandoned the notion of having a single malt around $40. That being the case this is definitely a get it while you still can type of deal with the Bowmore pricing.

As a special offering to our devoted whiskey fans both shops will be featuring Bowmore Legend at $34.99 , while supplies last.

Nate – finally, I love you for posting an actual price on a Healthy Spirits blog post.

Many times I’ve been interested in what you’ve posted, but don’t stop in because you don’t actually say how much it will cost. And I don’t feel like making a phone call or a trip just to find out.

Please – continue this practice! And ask Dave to do the same on the beer side….

Thanks for the comment Ethan, overall your probably right. I think up until now I’ve always tried to let the whiskies I’ve posted about speak for themselves, independent of their price. The sort of ideology that good whiskey is good whiskey regardless of price. But I can see your point, so I’ll make an effort to post more prices.

Also don’t forget the full whiskey menu with all of our prices is on the top left side of this page, it’s a super easy way to double check the price of anything you might be interested in. Cheers!