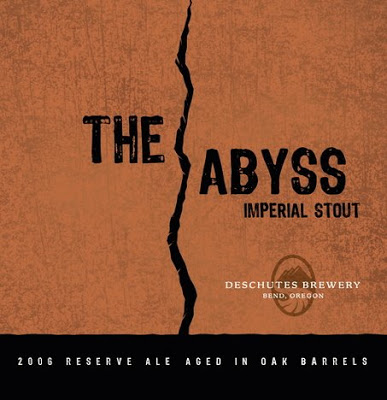 The Abyss is finally here again. Quantities are limited, so reserve one while you can. They are also stocked on the shelf, so if you’re fast, you might be able to grab one. Like the Firestone 12, this one was really limited, so we are limiting to 1 bottle per customer.
To Beer of the Month Subscribers: I usually don’t like to let people know what Beer of the Month is before they pick it up, but I thought you might like to know that one of the featured beers is THE ABYSS. So if you are a Beer of the Month subscriber, you get an Abyss without having to run around and try to reserve bottles.
———————————————————————————-
I am expecting Goose Island Bourbon County Stout tomorrow, probably in the late afternoon. It’s one of my favorite barrel-aged strong ales, and I reccomend everyone give it a try while it’s around. There will be a post tomorrow to confirm its arrival.
—
———————————————————————————-
In our continued efforts to expand, we just added another two shelves, which will soon be full of fantastic beer. I’m still looking for suggestions for breweries and beers people want to see at Healthy Spirits. Let me know!

Do you have a price for the Abyss? Thanks.

Yes sir it is. The brewpub is greatness. I try to make it there at least once a year.

I bet I can guess which day:)

Not necessarily on DL Day. It has to work around a time when I have tickets to my beloved Cubbies.

That’s an old picture up there right? Or is this years Abyss 2006 reserve?

It’s just an old pic of the label. I just realized.

Would love to see some Alesmith on those new shelves if at all possible.

Unfortunately, Alesmith is still unavailable. I’ve heard rumors of it getting distribution, but nothing yet. I will post as soon as I hear something. Lots of new stuff on the way, though.