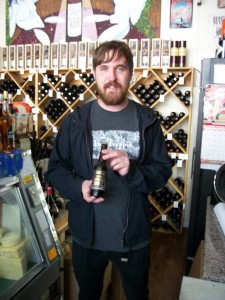 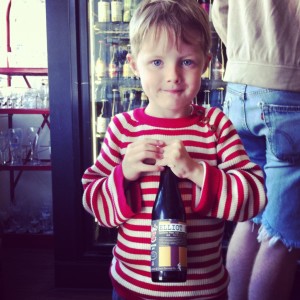 Jeppe Jarnit-Bjergso, head brewer of Evil Twin, dropped by the shop yesterday in search of a few local bottles – “Just doing some research” he says. Jeppe has been churning out a fantastic array of Imperial Stouts and other equally-excellent brews for quite some time now, first brewing with his brother Mikkel (Mikkeller). It was only last year that Evil Twin brews started showing up in the states, and they’re already becoming house-hold names amongst beer geeks everywhere. Above, he’s holding his self-proclaimed favorite “Even More Jesus”, a thick and chewy Imperial Stout.
Jeppe was traveling with his son as well, and it turns out that he was the inspiration for an Evil Twin libation fittingly titled “Elliot Brew” – an IPA-style beer brewed in honor of his birthday. Pictured below his father, Elliot graciously poses with his beer.