What a wonderful day it was to be a whisky enthusiast yesterday. Whisky Fest is San Francisco’s biggest and best whisky tasting all year, put on by Malt Avocate’s Publisher and Editor John Hansell. So enamored and captivated by this event was I that I’m even using the non-bourbon spelling of whisky (which can also be spelled: whiskey).

Aaaaaah where to begin. In addition to featuring virtually every whisky on the planet there was a decent amount of educational seminars. Some of the stand out speakers included: Parker Beam (Master Distiller Heaven Hill), Rachel Barrie (Creator/Master Blender Ardbeg), Henry Preiss (Preiss Imports/Anochor Spirits), Steve Beal (Master of Whisky), Simon Brooking (Laphroaig), and many more.

Some of my personal highlights included: chatting with industry legends Julian and Preston Van Winkle, trying Buffalo Trace’s 2010 releases of the Antique line, due to hit shelves next month, trying Ardbeg’s full Scotch line up next to two custom Ardbeg Choppers made specifically for the event, and meeting John Hansell of Malt Advocate. 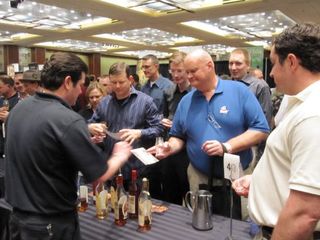 My favorite Whiskys of the event:

Hudson (Tuhilltown Spirits, NY): There has been so much hype about this particular distillery the last few years, couple that with the fact that their one of the few micro distilleries making whisky, and this was an absolute must try for me. Let me just say that I was absolutely blown away. These guys take serious pride in every step of the process from choosing only the finest locally grown New York corn and grains to even playing music for the whisky as it slumbers in barrels. Apparently the vibration from the bass helps add flavor and character to the whisky, and with a product this good they might be on to something. Over all my favorite whisky in the line was the four grain bourbon.

Ardbeg (Scotland, Islay): Absolutely love this distillery for continuing to push the envolope, as I’m sure most peat enthusiasts would agree. I have to say the differences in flavor profile between the Roller Coaster and Super Nova are subtle at best, but being that Super Nova is one of the most sought after and flavorful “peat monsters” on the market that’s not really a problem. The winner for me in the line up was the 1990 Nam Beist. It’s the only juice from the distillery that was made before the distillery closed down during the mid-90’s, and it’s also the oldest release at 18 years old. It has the fantastic in your face peaty, smoky, stoney minerality that Ardbeg is known for, with a great rich oak character from the 18 year aging which really balances it out. Nam Beist is also pretty close to retirement as only a few precious bottles remain. I have some at the shop so get it while you can.

Pappy Van Winkle (Kentucky): I can’t bring myself to end this review without mentioning the Van Winkle brand of bourbons. I myself am no stranger to their legendary line of bourbon and unless your new to the whisky world you aren’t either. Julian and Preston are a class act all around, and it was nice to finally meet them. Their bourbon is simply the best in the world. I don’t care what bourbon you want to challenge me with, even your mythical bourbon from space made with ancient mayan corn, barley from the top of Mount Everest and rye from the Moon, my Van Winkle bourbon is still going to beat yours head to head. Oh yeah and the Van Winkle line is due to hit shelves at the end of the month, your welcome.