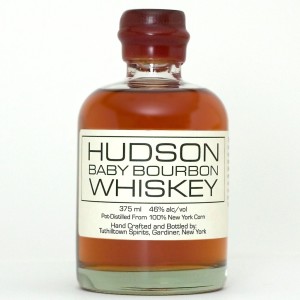 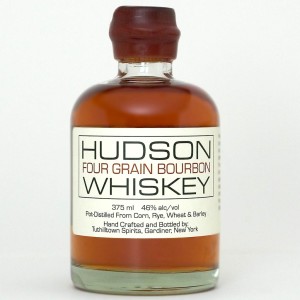 Putting New York back on the map for artisan small production spirits is Tuthilltown Distillery and their critically acclaimed Hudson Whiskey! Before prohibition many farms in New York would distill excess grains and fruits into small batch spirits. Once a breeding ground for fantastic rye and other whiskey, New York has been without a whiskey producer for the last 70 some years. Enter Tuthilltown who in 2001 decided to convert a mill granary into a micro distillery. Hats off gentlemen!                                      Hudson Baby Bourbon: The first Bourbon ever to come out of New York is unique with its use of 100% corn, instead of the traditional corn, rye and barley. It may be young for a bourbon but is imparted with a concentrated oak flavor from special small oak barrels that help increase the barrel to whiskey ratio.
Hudson Four Grain Bourbon: A more traditional bourbon entry that brings together the ingredients of corn, wheat, rye and barley in a symphony of flavors. The end result balances the soft richness of corn, the sharp peppery notes of rye, all the smooth subtlety of wheat and the sweetness of malted barley.
Hudson Manhattan Rye: The quintessential ingredient in a Manhattan cocktail will always be a good rye. With a subtle fruity, floral and peppery yet smooth taste you’d be well advised to serve this highly acclaimed rye neat, or with a splash of spring water. This is a worthy tribute to one of America’s pre prohibition favorites.

One reply on “Hudson Baby!”

All four of these will be available for sampling at the Whiskies of the World show on March 27 2009. Check it out: http://www.whiskiesoftheworld.com/wow