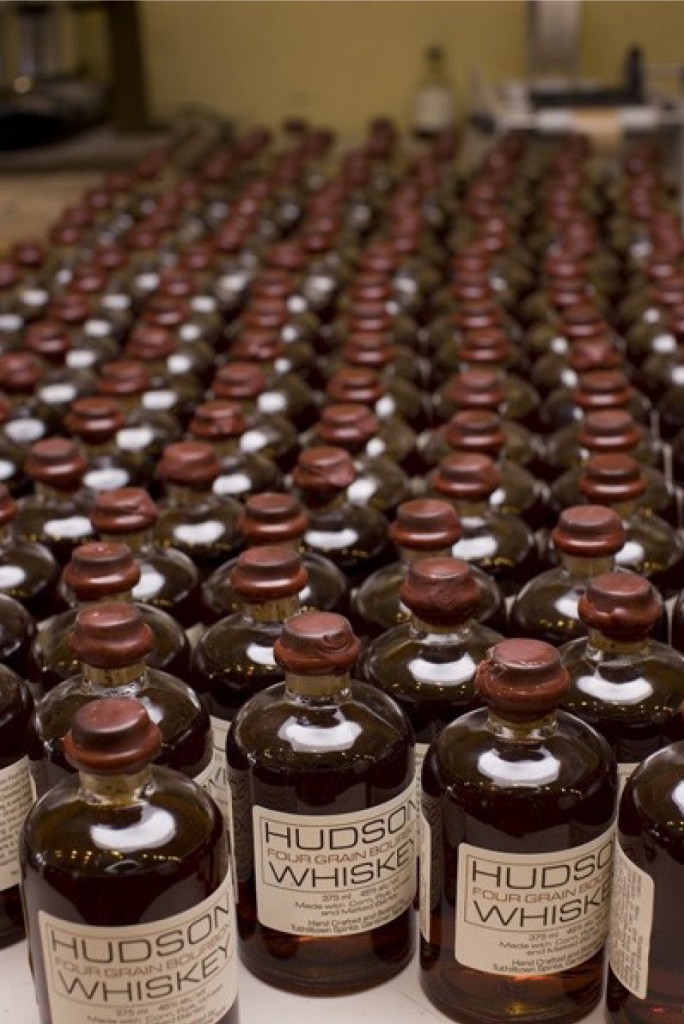 Welcome friends to another edition of Healthy Spirits Bourbon Club. In our constant effort to bring you the best bourbons on the planet quality is of the up most importance. But when you have a truly exceptional bourbon producer that manages to pair that quality with innovation and sustainability, that my friends sets the stage for a bourbon of epic proportions. And that is exactly what Tuthilltown Spirits has accomplished with their Hudson Four Grain Bourbon.

We are breaking new ground with this month’s selection people, no really, and you won’t believe how many firsts there are:

-First time we have ever featured a micro distilled bourbon (there seriously aren’t that many, most of the world’s bourbon is made in 7 macro distilleries in Kentucky)

-First time we have ever featured a bourbon made in New York (New York once a breeding ground for farmer distillers was primarily known for rye whiskey production, making Hudson the first ever bourbon produced in the state. Hudson is also New York’s first whiskey produced since prohibition)

-First time we have ever featured a bourbon that has loud music playing for it while it sleeps (seriously, the guys at Tuthilltown Spirits believe loud bassy music helps develop flavor by vibrating the barrels)

-First time we have featured a half bottle of bourbon (ok a little bit of a reach here but Tuthilltown Spirits is having serious trouble keeping up with the demand for their product so by selling half bottles they double their out put). 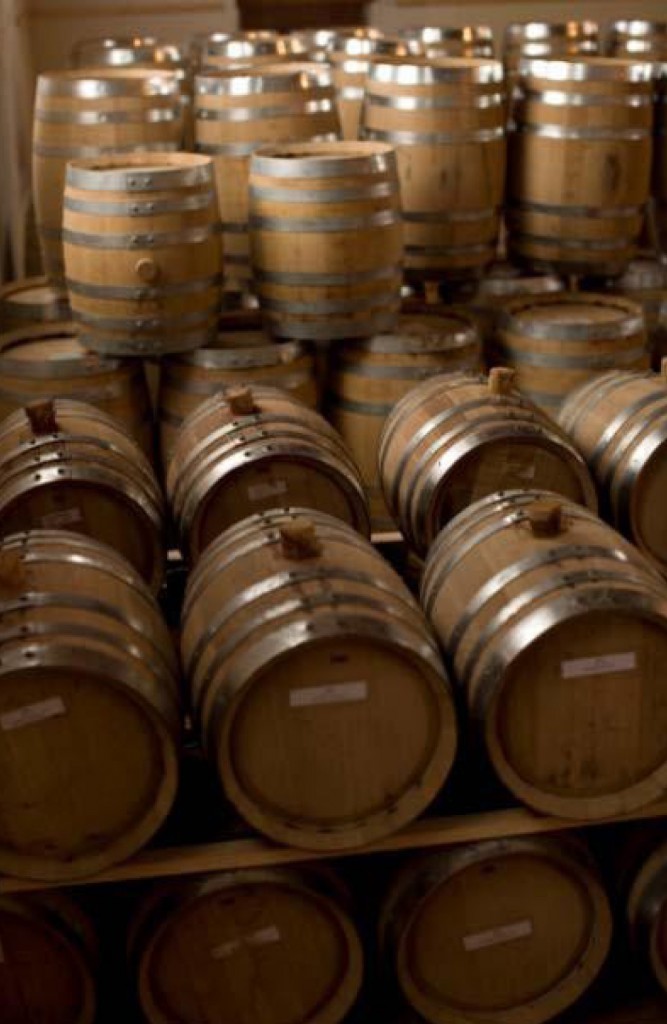 Since their history is rather short I’ll let the distillers tell you their story: “Before Prohibition more than 1,000 farm distillers produced alcohol from New York grains and fruits. Tuthilltown distillers are bringing back traditional batch-distilled spirits. For 220 years Tuthilltown Gristmill, listed on the National Register of Historic Places, used waterpower to render local grains to flour. In 2001 Ralph Erenzo and Vicki Morgan acquired the property and with the help of partner Brian Lee, they converted one of the mill granaries to a micro-distillery.The partners worked tirelessly to teach themselves the craft of smallbatch distillation while navigating the legal and administrative aspects of building the company.

Two and a half years later Tuthilltown Spirits produced their first batches of vodka from scraps they collected at a local apple slicing plant. Now the distillers use fresh cider from nearby orchards. Production includes vodkas, whiskeys, rum, eau de vie, brandy, and infusions. New York’s first Bourbon is Hudson Baby Bourbon, distilled from 100% New York corn. Tuthilltown whiskeys are the first legally distilled and aged grain spirits produced in New York since Prohibition. In 2007 Gable Erenzo, joined the team and the distillery sent off the first international shipment to Paris. The team has continued to grow with the addition of Joel Elder, Jared Powers, and Nick Stoughton to the production team. Cathy Erenzo has come on board to manage compliance and administration. The Tuthilltown Spirits Team is thrilled to bring the craft of small batch spirits distilling back to New York.”(tuthilltown.com) Ralph Erenzo and Brian Lee had no previous distilling experience when they built their distillery from the ground up. In fact the location was originally intended to be a “climbers ranch”, due to it’s proximity to a celebrated climbing location at near by Shawangunk Ridge, and Ralph’s many years building climbing gyms and stunt sets. After local residents put up an intense legal fight to bar the climbing ranch from being built, Ralph began to look for business ideas that would not require neighborhood approval. He eventually came across a law passed in 2002 that encouraged micro distillers to set up operations with an inexpensive license costing only $1,450, which was very enticing when compared to the previous cost of an industrial distilling license of $50,000. Barrels at Tuthilltown Spirits, first time we have ever fit 33 barrels in one picture. Go ahead, count them, ground breaking! Once they got their license in order and completed construction of the distillery, experimentation with different local ingredients began. The first spirit produced was the afore mentioned apple vodka sourced from local apple scraps. To this day, Tuthilltown sources 90% of their raw material from farms within a 10 mile radius of the distillery, which allows them to test different heirloom varietals and ingredients. This also allows them to maintain high standards of quality as all ingredients are heavily scrutinized. They also do a fair amount of grain growing on the property itself, making their product even more sustainable.

Due to the short supply of information about distilling, as many distiller’s closely guard their techniques and recipes, Tuthilltown Spirits essentially had to learn from trial and error. One of the more innovative techniques that came from this experimentation was the use of smaller barrels to age whiskey. Using barrels 1/8 the size of normal whiskey barrels they were able to in part rich flavor and color, and achieve peak maturation in a fraction of the time it takes most whiskeys. This ability to produce whiskey in a relatively short period of time has been instrumental in their success as a micro distillery.

Distillation: double distilled in pot stills Barrel program: Hudson uses barrels 1/8 the size of commercial whiskey barrels, increasing the surface to whiskey ratio, and dramatically reducing the maturation period needed Serving suggestion: Neat, probably not going to need water with this one, it is, as Adam Sandler would say in Don’t Mess with the Zohan, “silky smooth”

Tasting Notes: One of the great things about a micro distilled bourbon is the unique flavor profile. Heaven Hill, as an example, makes 1,400 different bourbons, many of them for export only, and with only a handful of different recipes you can summize that hundreds of their bourbons are essentially the same juice with different labels slapped on them. Each and every one of Tuthilltown’s whiskey have their own unique mash bill and there for different flavor components. Pours a nice dark caramel to amber in color with aromas of maraschino cherries, dates, brown sugar and milk chocolate. Very well rounded and inviting on the nose. The first sip is incredibly soft and creamy on the palate, as the flavors develop notes of chocolate covered cherries, caramel, roasted pecans, vanilla, toasted coconut, cinnamon, and Belgian waffles with whipped cream come through. That’s right I said flavors of Belgian waffles with whipped cream, ground breaking! As I continued to sip I was impressed with how full and lush it was on the palate, about as elegant as they come, and I found myself saying “wow” is this really what a small artisan producer can do. The finish on this one is some what short, but it goes down so rich and smooth you just want more and more with every passing sip. Outstanding stuff!

In all honesty I haven’t had a chance to try this cocktail yet but I got this recipe off their website and it looks really tasty right? Although it is only a 375ml bottle, so I don’t blame you for savoring every last drop straight.

Until next month, let me leave you with this parting gift in the immortal words of Frank Sinatra: “I feel sorry for people who don’t drink. When they wake up in the morning, that’s as good as they’re going to feel all day. ”

Well that’s it for this month’s Bourbon Club, hope you all enjoyed it. As always I welcome all comments and suggestions.