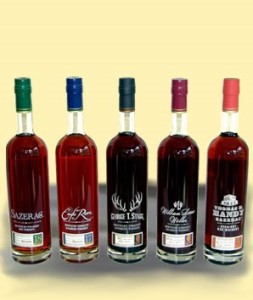 Here at Healthy Spirits we’ve been on a mission lately to bring you some of the rarest and best Bourbons in the world. Bourbon is a unique spirit which is recognized as a distinctly American product, has it’s Scotchs, has it’s Cognacs and Armagnacs(amoung others), has it’s Tequilas and here in the States we have that sweet brown nectar known as Bourbon. Bourbon’s distinct flavor comes from the large amount of corn used in the mash(51% or greater), as well as the combination of rye, barley and/or wheat. It is this use of 3-4 ingredients in different ratios that allows for such a tapestry of different flavors. Not surprising many believe that Bourbon is the most skillfully crafted spirit in the world. Anyone thristy yet?

Without further ado here’s some of the new Bourbons we just recieved:

Sazerac 18yr – Enormous in every respect, from its thick, chewy texture to its unbelievably spicy and powerful flavors. Notes of mint, eucalyptus, cinnamon, vanilla, molasses, oak, leather, and lingering pepper.

Can we do some shots already? Anyway most of these are extremely limited quantities, so get em while you can, or before I drink them. I also have a couple Pappy Van Winkle 23yr left in addition to some other great single barrel Bourbons you can find on our new Bourbon Menu: