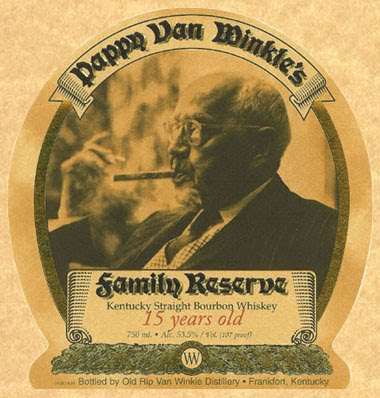 We are happy to announce the long awaited arrival of the Old Rip Van Winkle line. Just in time for the holidays, bring some class and sophistication to your Thanksgiving, or impress the relatives with an extraordinary Christmas gift. The Rip Van Winkle line is the most sought after and critically acclaimed line of Bourbon in the world and the secret lies in the use of wheat instead of rye in the mash. Wheated Bourbons tend to be softer and smoother on the palate and are said to age more gracefully. New in:

Old Rip Van Winkle 10 year 107 proof Bourbon
-The youngest in the line of Bourbons, this one packs quite a punch being bottled at barrel proof and yet delivers on the subtle poise and complexity synonymous with Van Winkle Bourbons.

Van Winkle Special Reserve 12 year Bourbon
-This Bourbon strikes a perfect balance between age and bottle proof. Due to it’s well integrated sweet and smooth character it can give any fine Cognac a run for it’s money. In 2008 it won the “Best in Class Gold Medallion”at the International Wine and Spirit Competition and was also awarded a “Trophy for Worldwide Whiskey”.

Pappy Van Winkle’s Family Reserve 23 year Bourbon
-The absolute most limited quantity Bourbon of the entire line. Received a 99 out of 100 from both the Beverage Tasting Institute and the World Spirits Championships. Doesn’t get much better my friends.

Unfortunately due to the extremely limited quantities we will not be able to ship these. Come and get it!

Nate,
Thanks for talking me into it. Looking forward to cracking it open on the weekend.

My cousin recommended this blog and she was totally right keep up the fantastic work!
van for sales