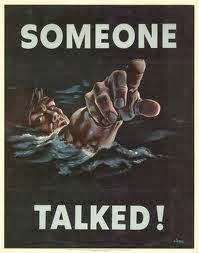 Healthy Spirits San Francisco and Oakland’s Ale Industries hatched the plan. Four Barrel, Philz, and Sweet Maria’s coffee kept the soldiers alert. Buffalo Trace, Four Roses, and Colorado Gold distilleries supplied the artillery. Their movements were top secret, or so they thought.
Caught in an ambush it was too late when they found out:

1) WHITE or SILVER capped SOMEONE TALKED! went through a year of boot camp in a Buffalo Trace barrel with a Four Barrel Coffee addition.

2) RED capped SOMEONE TALKED! did a year-long tour in our Colorado Gold barrel with a touch of Ale Industries’ house-roasted beans from Sweet Maria’s Coffee.

3) YELLOW capped SOMEONE TALKED! counted 365 days in the brig with a Four Roses barrel with some  Philz Coffee.