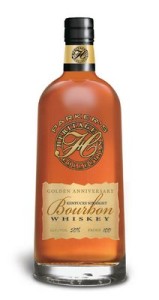 Parker’s Heritage Golden Anniversary Bourbon has finally arrived at Healthy Spirits and in case you hadn’t heard it was just crowned  “American Whiskey of the Year” by John Hansell of Malt Advocate. This is the third release in the tribute series that pays homage to sixth generation master distiller Parker Beam. To commemorate his 50 years in the industry he has hand selected a bourbon from each decade of his tenure and married them together to make this amazingly refined spirit. That means this tiny production bourbon (only 1,500 bottles) contains whiskey asleep in oak barrels since the 60’s and 70’s.

“Very well balanced and mellow on the nose and palate. Sweet notes of mature dark rum, toffee, nougat and candy corn with dried apricot, golden raisin, hot cinnamon, mint tea, and vanilla. Polished leather and tobacco lead to a long, contemplative finish. This is what an ultra-mature bourbon should taste like: all the depth and complexity that comes with this much aging without all the excessive oak. The wood is there, but it never crosses the line.”

Sounds lovely. How much? How many do you have?