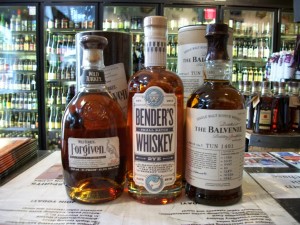 Got a few new things in the last week or two that have been attracting a lot of interest:

-Wild Turkey Forgiven $63.99: An accidental blending of a bourbon and rye.

-Balvenie Tun 1401 Batch 9 Single Malt $299.99: One of the most sought after single malts ever released, very limited quantities so get it while you can (Castro only).