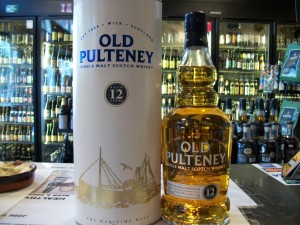 Finally brought in the Old Pulteney 12 Year, a Scotch that’s considered the “Classic Maritime Malt”, from the fisherman’s village of Wick. Here’s a little about the distillery from the website:

“The Pulteney Distillery was established in 1826 in the heart of ‘Pulteneytown’, the town created to house fishermen during Wick’s herring boom. The most northerly distillery on the Scottish mainland, it has an absorbing history, passing through the hands of various owners. However, through the years the quality of the whisky has endured.”

Old Pulteney is one of the definitive coastal distilleries. The flavors are saturated with notes of sea air, seaweed and brininess. If anyone has any interest in the older vintages feel free to let me know and I’ll happily bring them in. I know the 21 year Old Pulteney won best whiskey of the year in Jim Murray’s 2012 Whiskey Bible. Cheers