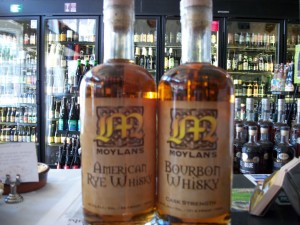 Well isn’t that just perfect, one of our favorite breweries is now making whisky. Moylan’s brewery, makers of several well crafted beers and our first bourbon barrel aged release, have started working with Stillwater Spirits in Petaluma CA and are now making bourbon and rye whisky. As if we needed even more of a connection between our two favorite things, beer and bourbon enthusiasts can now rejoice!

Moylan’s Cask Strength Bourbon Whisky 60.8% Alcohol (121.6 proof)
-I’ve been told this is in the 2-3 year age range. What I think is clever right off the bat is the decision to leave it cask strength. Younger bourbons can be amazing, but don’t necessarily have the depth to maintain their flavor profile when watered down to bottling strength. On the nose I get notes of caramel, vanilla and a touch of toasted coconut. On the palate I get notes of butterscotch, creme brulee, vanilla and white florals. Really delicate-soft flavors even at cask strength, and perilously drinkable!

Moylan’s American Rye Whisky 49.5% Alcohol (99 proof)
-Also in the 2-3 year age range. Back of the bottle says: “Before now, an immpeccably constructed rye whisky was impossible to find”. Probably a little bit of a stretch but hey, good rye whisky isn’t exactly growing on trees these days. This is a great example of a perfectly proofed whisky. Its not cask strength, but you can tell from the concentration of flavors and balance that this was well thought out and tested before bottling. There is a fair bit of spice on the nose: aromas of peppercorns, allspice, roasted nuts, cinnamon and marzipan. As it washes over the palate I get flavors of: aged fruitcake, ginger snaps, cardamom, nutmeg, dates, earth and toasted oak. Super complex and exceedingly well rounded!

Both the rye and bourbon are local, micro distilled and well…… awesome. You want these!