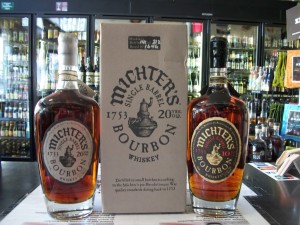 Holy cow am I excited about today’s new arrivals. It feels like Christmas mourning around here, but instead of snow it’s raining heavenly bourbon! I could make a case for this being the best release of the year. But wait a minute you say? What about Pappy Van Winkle? Well as many of you may know Stitzel-Weller barrels (a distillery Julian Van Winkle was involved with until it closed in 1992) are getting harder and harder to come by since none have been produced in 20 years. Stitzel-Weller bourbon is the main component of Pappy Van Winkle 15, 20 and 23 year, and it use to be used in the 10 and 12 year bottlings as well, which are now being made by Buffalo Trace. I have a feeling Michter’s 20 year bourbon, which is probably closer to 23 or 24 years old , may be a single barrel from Stitzel-Weller. Really no way to know for sure as the company is very tight liped about revealing their sources, but my palate usually doesn’t steer me wrong. Regardless it’s one of the best bourbons I’ve ever had.

I was also able to secure a decent amount of the Michter’s 10 year bourbon. Michter’s has this notion that they can and should exceed your wildest expectations for a given age statement. While the 20 year is closer to a 23 or 24 year, the 10 year is likely in the 15 to 16 year range. Basically they want their 10 year to be better than any other 10 year on the market, so how do they do that? By putting out a 16 year and calling it a 10 year, kind of clever in a way. The last bottling of 10 year Michter’s bourbon is rumored to have been a Stitzel-Weller bottling as well, and after opening the current one I have to say, it tastes surprisingly similar. But again no way to confirm that notion. Even if they’re not Stitzel-Weller products these two bourbons have an incredible amount of depth and oak (they are seriously much older then their age statement), are elegant, refined and some of the best sauce going right now. Don’t sleep on these, they definitely won’t be around for long!

The Van Winkles had a family squabble and sold in 1971-2. Julian had little more to do with it at that point than summer jobs as a gopher. SW made lots of brands so just because its from that place doesn’t mean it’s pappy. With that said I’d put the early bottlings of the 10 not latter ones up against it. They were KBD owned barrels anyway. Pushing these as a SW is dangerous

Thanks for the input and feedback. I had heard the Van Winkles sold Stitzel-Weller in the 70’s, so it probably wasn’t accruate to say he ran it until it closed in 1992. My understanding was that he did continue to have some sort of a role at the distillery though, and he certainly sourced barrels for his Van Winkle releases.

As far as the notion that just because its from SW doesn’t make it Van Winkle, I totally agree with that. Many of the SW bourbons I’ve had (Jefferson’s Presidential, Vintage 17 year, Michter’s 10 year) are essentially the same wheated recipe as Van Winkle and taste strikingly similar. Only a Van Winkle bourbon is a Van Winkle bourbon but my point is there are other similar bourbons out there even ones like Michter’s that use the same juice. There was an interesting article published by Malt Advocate which details the components of each Van Winkle bourbon: http://www.whiskyadvocateblog.com/2012/06/11/what%E2%80%99s-in-that-bottle-of-van-winkle-anyway/

I don’t want to take anything away from either of the two brands, they are both excellent and definitely have their differences. But now a days when a product like Van Winkle sells out in 20 minutes, but we have something utterly similar in Michter’s, I feel like its my duty to let people know. I am a bourbon fan at heart 🙂

It’s better than pappy. I’d take a nice glass of mitchers 10 or 20 over every Bourbon I’ve ever tried. That includes pappy and the Buffalo trace EC.