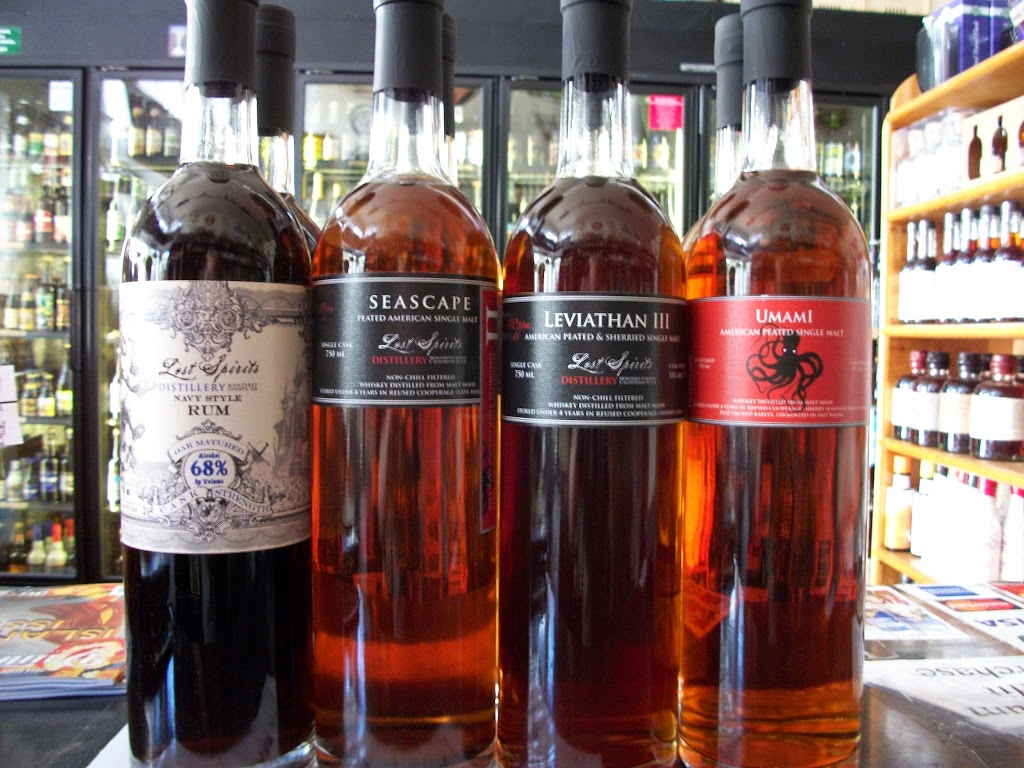 I couldn’t be more excited about the incredible line of Lost Spirits products we got in today! These are all extremely limited, some haven’t been available for a while and some have never been available. The Leviathan is batch number three and the Seascape is batch number two, while both the other releases are brand new products. The three single malts use 100% California barley smoked with Canadian peat and are fermented in salt water. Here’s what we got in:

–Leviathan III Peated Single Malt: 110ppm (parts per million peat), one of the peatiest whiskies in the world, cask strength (53%), aged in sherry casks. One of the most interesting and unique whiskies you’ll ever try. Don’t be fooled into thinking this is anything like a peated Islay single malt Scotch. Canadian peat has a much different terrior, think evergreen forests: Black Spruce, White Spruce, Balsam Fir, Lodgepole and Jack Pine. The barrels Leviathan ages in were charred slightly more than the other two, adding a little more color and caramely flavors. $64.99

–Umami Peated Single Malt: The newest member of the peated single malt line up. Umami has around the same ppm’s peat as Leviathan (around 100ppm), and is cask strength (59%), but it’s different from the other two by way of its higher salt content. Each of the three single malts are fermented in salt water but only Umami is ferment in a solution that matches the ocean’s salinity. This creates some very different results as sodium more readily binds to certain flavor compounds producing different flavors in the finished product, and the boiling temperature during distillation is altered allowing for certain esters and phenols that wouldn’t normally come through to make it to the finished product as well. This whiskey is a little fruitier and brinier than its siblings, and it was one of our favorites at the Whiskies of the World Expo a few weeks ago. $69.99

–Lost Spirits Navy Style Rum: This is the best rum you’ll ever try! A lot of people throw around the concept that their rum is a whiskey drinkers rum but this is the only one I’ve ever seen deliver on that promise. It starts with baking grade molasses, not the heavily processed and chemically altered black strap that just about every rum distillery uses. This is the real, high quality stuff. After barrel aging Lost Spirits employs a revolutionary technique that simulates the barrel decomposition you’d find in 30 and 40 year barrels. After a certain amount of aging decomposing barrels produce some very desirable flavor compounds, you’ll find these a lot of times in older Cognacs and Armagnacs.

No one has figured out how to re-create this process in a short amount of time, until Lost Spirits figured out a way. The process uses UV light shown threw the oak to expedite production of the chemicals found in old barrels. The rum becomes literally the color of black coffee and is bottled at a robust 68% (cask strength). There is no flavorings, colorings or any other additives what so ever. This is rum the way it was always mean’t to be, and as such I give it my highest recommendation! You want this. $54.99

Available @ Both Shops. Get em while you can. Cheers