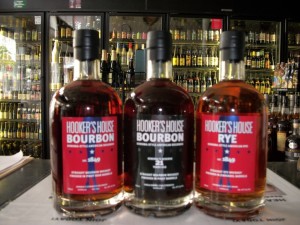 Got some new whiskies in from Hooker’s House, a brand a lot of people have expressed interest in the last year. I was really impressed with what they had to offer. The rye is on the younger side, around 4 years old and is likely sourced from LDI. They finish it in Zinfandel barrels which I think adds a lot of depth, some musty grape notes and just a hint of spice. It’s the first red wine finished rye I’ve ever seen.

Both of the bourbons are finished in Pinot Noir barrels and manage to take on even more red wine character than the rye. Their regular bourbon is a six year likely sourced from Heaven Hill. It tasted significantly older than six years to me, more like the depth and oak of a 10-12 year. The Pinot Noir flavors are incredible giving the bourbon a great minerality, notes of stone fruits, blackberries, earth, pencil shavings and charred oak.

The 21 year bourbon was something to behold. Although we weren’t told the source my co-worker Dave thought it might be Stitzel-Weller. It reminded me a lot of the older Willett Family Estate bourbons I’ve tried. Regardless, one of the best bourbons I’ve ever had and very unique. It says cask strength on the bottle but what I’ve been told is they diluted the whiskey with water while it was still in the barrel, so even though its 47% alcohol no water was added to the whiskey after it came out of the barrel making it “barrel strength”. What’s interesting is when I first tried this bourbon it was so cloudy and murky the rep immediately told me they planned on filtering it before bottling. I told him it was great as is and that they should leave it unfiltered. Realizing that would save them a couple steps and a decent amount of time he agreed to release it that way (aaaahem, your welcome). I get an amazing amount of depth and oak on this with flavors of burnt caramel, port wine, concrete, gravel, eucalyptus, rye spice, dark chocolate and flint. My rep has already told me they aren’t going to be getting any more barrels this old, so get it while you can!