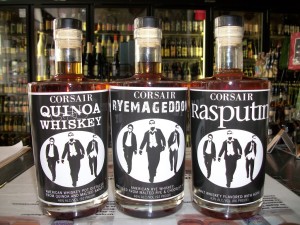 Just got a shipment of aged whiskies from Corsair, the first time they’ve ever been available in the Bay Area! Corsair is a micro distillery in Kentucky that has a reputation for having unique products and doing a lot of experimentation. The quinoa whiskey definitely uses a grain I’ve never seen in whiskey before, and I was surprised how much I liked the finished product. They use red and white quinoa seeds and are able to extract flavors of roasted nuts, earth, vanilla, toffee and a hint of espresso. This is more than just an experiment, it’s an overwhelming success.

The Ryemageddon is also quite unique. Most American rye whiskey is made with raw or unmalted rye grain which lend most of the spicy, floral and earthy notes. For the Ryemageddon Corsair uses malted rye and chocolate rye (heavily charred). While it lacks the typical rye spice it more than makes up for it with lush notes of dark chocolate, creme brulee, burnt caramel and bread pudding. Totally different take on a rye but man oh man is it good.

Lastly we have the barrel aged Rasputin, which is made from an imperial stout beer. My understanding is that when they’re distilling it they allow the whiskey vapors to pass through a basket of hops, almost like botanicals in gin, making it a hop flavored imperial stout whiskey. Basically this whiskey is the “kitty’s titties”, if you’ll excuse the workaholics reference. It’s super floral and hoppy on the nose but wonderfully rich and chocolaty on the palate. The hop flavors are well integrated and the whiskey really tastes like a fantastic roasty-chocolaty stout. Well done guys, well done.

Pretty limited numbers on these people, I only got 6 bottles of each just FYI.