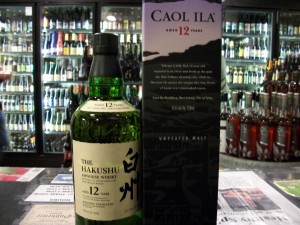 Got some pretty limited new single malts in today. First off we have the Caol Ila cask strength unpeated 12 year. A Scotch that is rarely seen, if ever, in Northern California. This is an extremely sought after offering that is only made once a year at the distillery. It shows concentrated flavors of heather, sea weed, brine, stoney minerals, honey and peat. We also got a small shipment of the Hakushu Japanese 12 year single malt. This is made by Suntory who also makes Yamazaki and Hibiki. Hakushu uses 8-9% peated barley and is unbelievably soft and approachable. It shows notes of butterscotch, sea air, pine, sunflower seeds, smoke and earth. The release was tightly allocated and will not be available again for a year or so. You want these!