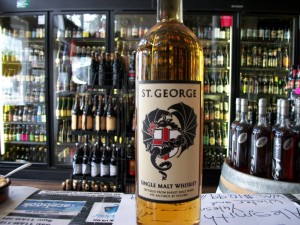 Happy to announce the arrival of another locally made whiskey, St. George Single Malt. This is no new kid on the block, St. George has been making and refining their single malt for the better part of 15 years. I’ll let the distiller regale you:

“We’ve been making single malt for 15 years now—well before the dawn of the modern American craft whiskey movement. It is with great pride that we can offer you Lot 10, our tenth bottling: distilled, aged, blended, and bottled by us here in California out of love for what a handcrafted whiskey can be.
Making whiskey is what drew distiller Lance Winters to distillation in the first place. Before starting at St. George, Lance had spent five years working as a brewer. When he realized that making beer was halfway to making whiskey, he turned in his brewer’s card and dedicated himself to the art and craft of distillation.

Now that we’re on our tenth bottling of St. George Single Malt Whiskey, Lance’s dream of making an elegant and expressive American whiskey has more than been realized. We start with two-row barley, then roast some and smoke the rest to bring out the character of the grain: various roast levels elicit rich aromas of hazelnut and cocoa, while smoking over beech and alder adds bass notes and complexity. You might think that intense roasting and smoking would give you a knockout firewater of a whiskey, but we distill and barrel age in a variety of cooperage types with the goal of making an ethereal single malt that’s gentle and inviting.

Each bottling is a little different since we’re able to draw from older barrels with every new batch we put out, but the goal is blend for “positive inconsistency”—increasing expressiveness and flavor with every lot we release. Our current bottling, Lot 10, was released in April 2011. To achieve just the right flavors and aromas, we ventured deep into the far corners of our whiskey library. Drawing from 18 different barrels (comprised of used bourbon casks, French oak, port barrels, and sherry barrels) allowed us to get the taste profile we were after, with notes of dusty cocoa, cola, honey, roasted nuts, and stone fruit.” (http://www.stgeorgespirits.com)

Anybody thirsty yet? Believe me you want this!