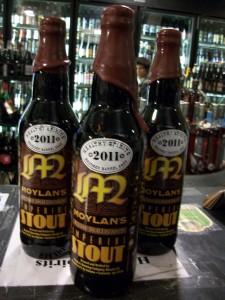 Nearly two years ago, Healthy
Spirits selected its first exclusive barrel of bourbon. We were amazed at the
level of quality control and selection we were able to have. The bourbon we hand
selected exceeded our wildest expectations and left us with a freshly emptied
barrel of exceptional quality. The next step was obvious; find a local brewer
and work with them to design a beer worthy of being aged in such a fine barrel.
So we contacted Denise Jones from Moylan’s Brewery in Novato,
and she suggested using the barrel for their excellent Ryan Sullivan’s Imperial
Stout. We are proud to present the first of many upcoming exclusive barrel aged
releases from Healthy Spirits. This beer spent ten months in an Eagle Rare 10
year barrel, and yielded just twenty cases of 22oz bottles.
Each release from our exclusive barrel program will feature California
brewers whose talent and ingenuity make them an important part of the craft
beer community. Each new single barrel bourbon selection will lead to the
production of a new beer, which we hope will allow us to release multiple beers
each year.
The bottle release will take place at the store on December 16, starting at 6:00PM. Denise from Moylan’s will be present to answer questions. Bottle sales will be limited to 2 per customer. Beer of the Month Club members may reserve bottles by phone from the time the event begins. No pre-release reservations will be accepted.
Keep an eye out for future Healthy Spirits exclusive barrel aged releases in the upcoming
months!