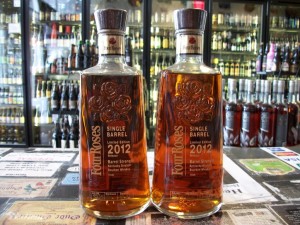 I just put some Four Roses Limited Edition 2012 Single Barrel on the shelf. This year Jim Rutledge selected a 12 year bourbon with the OESK recipe. OESK signifies the higher corn mashbill (75% corn, 20% rye and 5% barley) and the yeast strain which produces a rich spiciness with flavors of mint and earth. Interestingly enough there were only 5,178 bottles produced, which I would guesstimate required about 25-30 barrels. Since each was bottled as a single barrel there will definitely be some variance barrel to barrel. I happened to get two different barrels, one that’s 54.7% alcohol and one that’s 52.2% alcohol. Hmmmm, I wonder which one is better? Only one way to find out……..