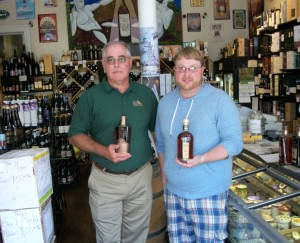 What a privilege to have legendary fourth generation distiller Eddie Russell of Wild Turkey stop by the shop. Eddie has been involved in the Wild Turkey Distillery for almost 30 years. About a decade ago he collaborated with his father, Master Distiller Jimmy Russell, to create the “Russell’s Reserve” line of products. Which included a 10 year bourbon, a 6 year rye, and more recently a 55% (110 proof) single barrel bourbon that I’d highly recommend trying next time you see it.

Wild Turkey has been working on building a much larger facility the last five years to keep up with the increased global demand for their products. Eddie told me one of the best aspects of the expansion has been the addition of a bottling line, which used to be completely outsourced. Not having a bottling line on site increased the time it took to get the finished bourbon to market and also added additional layers of costs. Another benefit of having a bottling line is that they can now begin a private selection program for accounts like us, allowing retail shops or bars to choose their own single barrel and have it bottled just for them. He figures the private barrel program is likely to come to fruition early next year.

A couple special releases to look forward to this coming winter are:

-A very limited older bourbon to commemorate Jimmy Russell’s 60 years with the distillery.
-A really unique blend of a bourbon and rye that I’m told happened by accident.

Both sounded amazing, releases we’ll definitely be looking for closer to the holiday season. Cheers

One reply on “Eddie Russell, Distiller at Wild Turkey, stops by the shop!”

Hope you got him to sign a few bottles….