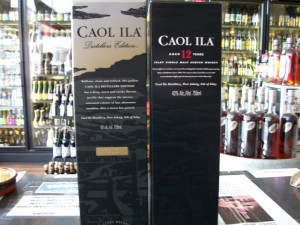 I know all you single malt fans can’t get enough from that beautiful island on the south west coast of Scotland we call Islay. Like Lagavulin, Caol Ila is peated to 35 parts per million. For comparison sake more heavily peated scotches such as Ardbeg and Laphroaig are peated to 55 and 43 parts per million respectively. While I don’t want to take anything away from their more fiercely peated brethren, Caol Ila is more about balance. With an amazing contrast between flavors of stoney minerals, smoke, peat, fresh cut pine, sea air and a beautiful malt sweetness, this is surely one not to be missed! Oh and Caol Ila Distiller’s Edition just won a double gold and the title of best single malt scotch at the 2011 San Francisco World Spirit Competition. So there’s that……..

caol ila 12 is one of the best buys in whisky!

Thanks Steve, I totally agree. Happy to finally stock it.