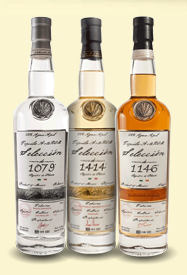 I met Jake Lustig at the San Francisco Craft Spirits Carnival earlier this year.  I was standing at a booth where a woman was pouring Mina Real Mezcal and Arte Nom.  I had tried the Arte Nom stuff before but had a lot of questions which I directed towards the poor lady who had no idea how to answer them.  That’s when Jake who was standing 3′ to my left jumped in and took control of the situation.  We must of geeked out about tequila and mezcal for ten minutes and at the end of tasting through the line we actually hugged it out.

Jake has been knee deep in agaves for a very long time.  He worked as the agave spirits purveyor for Southern Wine and Spirits for over a decade and over time felt that the way the industry was structured promoted mediocrity in the tequila world.  Particularly the laws which state that a brand’s Blanco, Repo and Añejo must come from the same distillery.

Jake, a self admitted agave geek eventually embarked on a journey to highlight agave and distilleries in a whole new way.  The tequilas of Arte Nom are meant to showcase just that.  On each label you clearly see the distillery’s identification number (1079, 1414 and 1146 in this case) along with the information you can really geek out on such as the name of the rancho, the master distiller and even the elevation and brix count of the agave used.

For someone like me who really appreciates the terroir of agave and the transparency of the process, this tequila does it for me.

In addition to this project, Jake has also built his own distillery making a line of mezcals called Mina Real which are fantastic though we do not carry them at this time.

I highly suggest this tequila for the agave geeks out there.  The flavor profiles differ from the Blanco, Repo and Añejo because they do not share the same base agaves but they are unique and quality driven.

2 replies on “Arte Nom: For the Tequila Geek in you”

Um, isn’t this the “bourbon” blog?

Well yes that’s a good point. If you think it makes more sense we could look into changing it to Healthy Spirits “Spirits Blog”, but it’s hard to start over again with the following we’ve built the last 5 years. Since we’ve been increasing our tequila and mezcal selections so much recently I think it’s fair to talk about and highlight them. I do often write about Scotch, so I’m hoping bourbon fans are open to other spirits We’re liking.