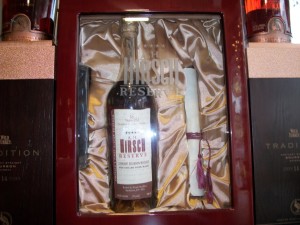 It’s a beautiful day for Healthy Spirits my friends. To quote a line from one of my favorite movies:

Barely holding back the tears myself, it’s an honor and a privilege to announce the arrival of the one and only A.H Hirsch 16 year Pot Still Reserve Bourbon!

There are numerous reasons why this is considered the best bourbon ever made. The story begins at the Michter’s Distillery in Pennsylvania where this bourbon was produced. Michter’s was the oldest licensed distillery in American history, with roots as early as 1753,  until it closed in 1988. The distillery also had the distinction of being the only producer of pot stilled bourbons after prohibition, making A.H. Hirsch 16 year the last pot stilled bourbon of it’s era. Pot stilled bourbons have long been relics of an earlier time, mostly being replaced by column stilled these days.

After the distillery closed in 1988 Adolf  H. Hirsch, a former executive of Schenley Co., bought up some of the left over lots of 16 and 20 year whiskey, and bottled it under his own label. In 1994 it was this bourbon, specifically the A.H. Hirsch 16 year, that received the first five star rating ever awarded from the renowned Spirit Journal publication, cementing it’s legacy as bourbon royalty. Currently A.H Hirsch has the oldest distillation date of any bourbon on the market, having been made in 1974, and since the Michter’s Distillery has been closed for 20+ years the few precious bottles that were left have mostly all dried up.

Taking that all into account, this is the holy grail of bourbons my friends. This is the absolute last bottling, never to grace the shelves of your local watering hole again. Just a fair warning it’s a little price prohibitive, but if you don’t mind skipping a rent or mortgage payment, your reward is one of the most sought after bourbons of all time. Plus it comes in a really fancy wooden humidor, so once you drink the bottle you got a nice place to keep your stogies……..

Thats all I got, Cheers!